This year, I am participating in the 2016 Book Riot Reader Harder Challenge. You can see more about what I’m reading for the challenge here.

The Challenge: Read a collection of essays.

Background:  I have a little more experience reading essays than I did with the last science nonfiction challenge, but not much. It’s mainly personal essays (e.g. Everything by David Sedaris, Not That Kind of Girl by Lena Dunham, The Idiot Girl’s Action-Adventure Club by Lauri Notaro) with a handful of cultural stuff thrown in (e.g. The Partly Cloudy Patriot and Take the Cannoli by Sarah Vowell, Sex Drugs and Cocoapuffs by Chuck Klosterman). I’d like to read more essays, but fiction almost always wins out.

The Book: My original choice was David Foster Wallace’s A Supposedly Fun Thing I’ll Never Do Again because I’m going on a cruise this year (and I apparently thought reading DFW’s take on a Caribbean cruise wouldn’t ruin the experience for me in advance? I don’t know. I have dumb ideas sometimes). Then my indecisive brain thought maybe I should read Bad Feminist by Roxane Gay or You Don’t Have to Like Me: Essays on Growing Up, Speaking Out, and Finding Feminism by Alida Nugent (because yay feminism!); or maybe Eat, Memory: Great Writers at the Table: A Collection of Essays from the New York Times (probably because I was hungry). I ended up going with the following because it was on my bookshelf and I am cheap and lazy. 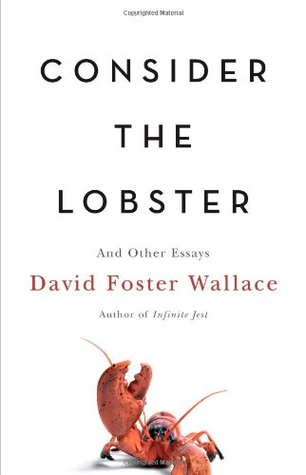 With the next few essays, we were well on our way to a 4 (if not 5) star review. His review of John Updike’s Toward the End of Time was a scathing takedown of one of “the Great Male Narcissists” that ends with the brilliant “It never once occurs to him, though, that the reason he’s so unhappy is that he’s an asshole.” I was still on board for “Some Remarks on Kafka’s Funniness from Which Probably Not Enough Has Been Removed.” He veers dangerously close to “American culture is puerile” territory (he actually writes “our present culture is, both developmentally and historically, adolescent”) in this essay, but he manages to do it with a thoughtfulness and insightfulness that keeps him sounding like a total crank.

And then there was a 50 page review of a dictionary. Somehow, I was still (mostly) on board. I don’t think anybody else could have made 50 pages on a dictionary as entertaining, fascinating, or funny as this guy. This essay is where the fan-girlish devotion starts to wane as DFW makes some problematic statements about abortion and race and, in what feels like an attempt to forestall criticism and blowback, tries to make some noise acknowledging his white male privilege. It felt a bit feeble and insincere and left me unconvinced. But still. I was in. While it might not show in my writing, I’m a grammar nerd at heart, so seeing DFW unleash his inner SNOOT (defined by Wallace as either “Sprachgefühl Necessitates Our Ongoing Tendence” or “Syntax Nudniks Of Our Time”) was an utter delight.

From there…you know… it was fine for a bit. The 9-11 piece (“The View from Mrs. Thompson’s”) captured some of the horror of that day, the sports autobiography (“How Tracy Austin Broke My Heard”) was cutting and funny, and the 2002 presidential election piece (“Up, Simba”) was perfectly entertaining. I also enjoyed the Dostoevsky piece, in large part, because I’m re-reading Dostoevsky at the moment.   All these pieces show Wallace to be a wildly intelligent and talented writer, but they were missing the sparkle I felt from the earlier piece.

Then there’s “Consider the Lobster.” Gourmet magazine got the bright idea to send David Foster Wallace to the Maine Lobster Festival, and he returned with an essay on the ethics of eating lobster. This is the title piece and, from the reviews I’ve read, is much admired, so I was optimistic. I love food writing! I love DFW! This would be great!

Perhaps because I’ve read too many similar works where the author dives deep into the complicated and uncomfortable story of how food gets to our plates, I was a little underwhelmed. It doesn’t feel like a particularly brilliant or admirable insight to walk out of a lobster festival with “man, this is fucked up” as your takeaway. The essay felt scolding and shaming, as if Wallace was sitting America down and lecturing us for being insensitive, thoughtless brutes for the way we consume animals and wanted us to admire him for doing so. I am probably being overly harsh here (and I was admittedly in a bad mental place myself when I read this one), but this essay left a bad taste in my mouth.

The collection ends with “Host” a profile of a conservative talk radio host in Los Angeles. Let me begin by saying that, I am hardly one to judge someone for using too many digressions (SEE: my continuing abuse of parentheticals). For the most part, I am on board with David Foster Wallace’s use of digressions. I like the footnotes! And the footnotes on footnotes! And all the other devices that might drive some people crazy. In “Host,” Wallace jumps the shark.

This is when I thought to myself “maaaaaybe this is getting a bit excessive.”

And this is when I started getting really annoyed. 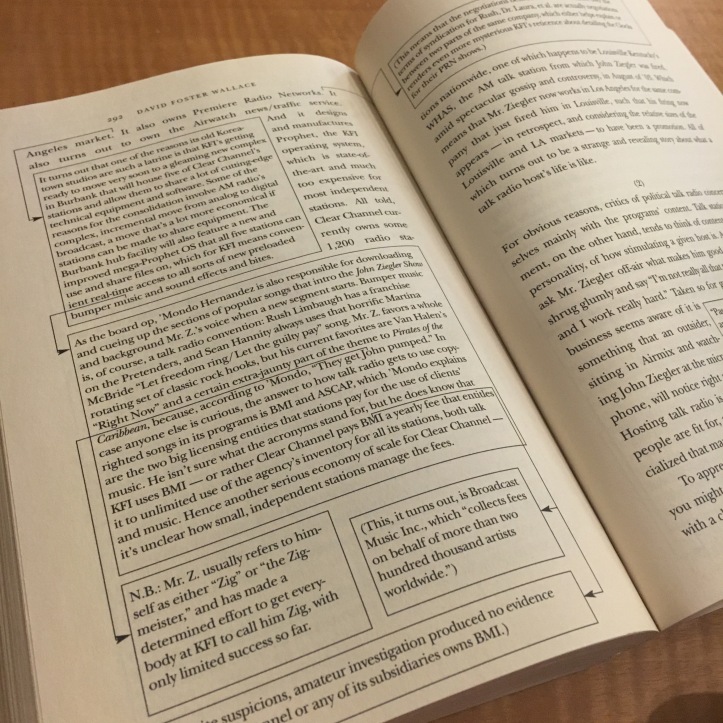 And this is when I quit. When he uses a text box to tell me that he’ll be defining an abbreviation later on. Why not use the text box to define the word? Or better yet, define it in text, as pretty much any other author might? Why can’t we go back to the simple days of footnotes and footnoted footnotes? 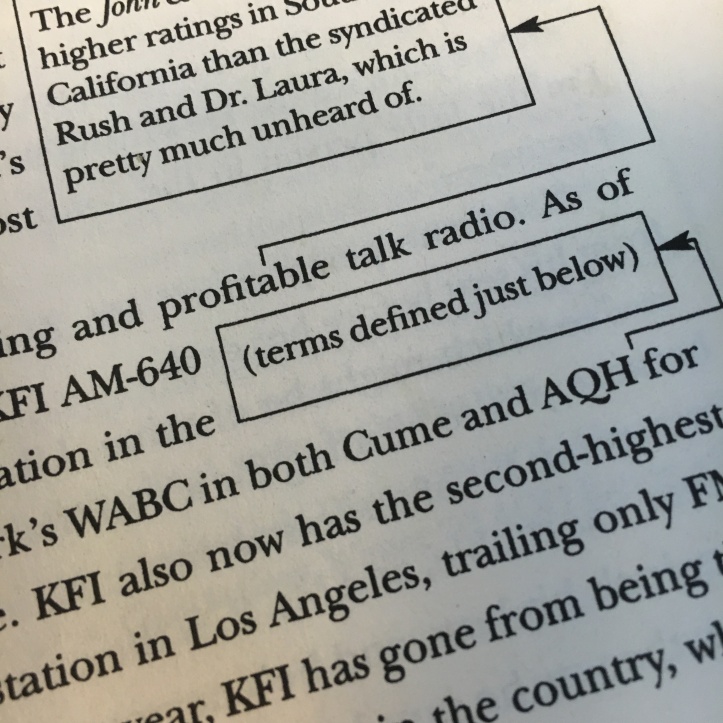 For all my snarking, I actually liked much of this book quite a bit and would recommend it to the right reader. I’ll certainly keep reading DFW and plan to keep reading essays.