Book Review: Heroes Are My Weakness by Susan Elizabeth Phillips 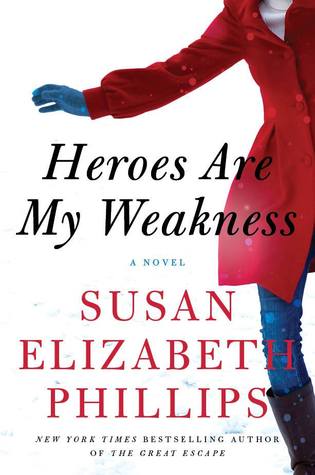 Sounds like a killer combination, right? The premise: Hapless heroine Annie Hewitt is a bit of a mess when we meet her. Recovering from pneumonia, mourning the loss of her mother, drowning in debt, Annie has come to the Peregrine island, a small, cold rock off the Maine coast, to regroup in her mother’s small cottage. Looking to rest and regroup, she’s disturbed to discover that residing in the creepy house at the top of the hill is Theo Harp, reclusive horror author and tormentor from her youth. Trapped on the cold, secluded island, Annie is faced with the dilemma (per Goodreads): “Is he the villain she remembers or has he changed? Her head says no. Her heart says yes.” Also, Annie is a ventriloquist.

The good? I like the coat on the cover. Susan Elizabeth Phillips is a good writer. The audiobook narration was acceptable. It made me want to curl up on a couch in a cottage with hot chocolate and a copy of Jane Eyre.

The bad? The rest. This book really did not work for me. Why?

This is the second book in a row where I’ve checked in with an author I’ve really enjoyed in the past and found myself very disappointed. I’m beginning to think I should let sleeping authors lie.

1.5/5 stars (because the writing is still good)